A new academic publication on Holocaust history in Ukraine 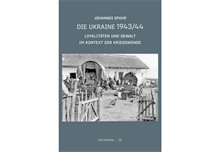 Before and during the retreat of the Wehrmacht 1943/44 Ukraine became an arena of mass violence. Until spring 1944, Wehrmacht units, police, SS and SD began committing mass killings in different manners. As a part of the guerilla-war concept (Bandenkampf) they burned down villages and killed or deported their residents, stole their food and products.

Due to various reasons, more and more people changed to the Soviet force in 1943, the author calls this process re-Sovietization.

On the other hand, during this period many Ukrainians joined the Wehrmacht or fled to the west. It was from the very beginning of the war that Ukrainians were drawn to build formations, which supported the occupational force, for example the Ukrainian auxiliary police.

Such formations supported the further polarization of Ukrainian people.