The XXII. All-Ukrainian competition of student works on "History and lessons of the Holocaust" I.B. Medvinsky. 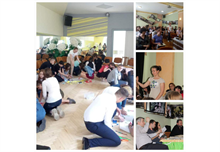 Important message!!! In these difficult and tragic times we are pleased to inform that there are events in our world that even the war cannot cancel!!!
On June 28-29, 2022, the final part of All-Ukrainian competition "History and lessons of the Holocaust" named after I.B. Medvinsky will be held online.
We wish aspiration, success and inspiration to the esteemed participants and members of the jury!!!