The Anne Frank exhibition was exhibited on June 25-28 in the Jewish historical camp “Shorashim” in Nikolaevka, Crimea. There were 105 teenagers 12-17 years old from 24 Ukrainian regions, Moldova and Byelorussia and 15 adults participating in the camp program. Teenagers from Moldova and Byelorussia had the unique possibility to visit the exhibition. Among non-Jewish participants there were 3 winners of the All-Ukrainian Holocaust studies’ competition organized by Ukrainian Center for Holocaust Studies and 2 Anne Frank guides (Sergei Stepanov and Katia Poliakova). Trainer of the exhibition Tatyana Velichko participated in program’s composition and gave consultations to the guides and tutors.
Anne Frank exhibition became the initial part of the camp’s program on Holocaust studies and remembrance. On June 25, peer-guides prepared for the excursion. On June 26, the morning class (2 hours) devoted to the nature of prejudice and Anti-Semitism was jointly conducted by peer-guides and tutors of the camp. Different inter-active methods were used for every age group. On June 27, specified as the Yoma Shoah day, morning class (2 hours) on the history of Holocaust was conducted by peer-guides and young historians. In the morning classes dilemma methods (“Warsaw Ghetto”, “My diary”, “Helga and Rachel”) were used, family oral stories about Holocaust were discussed. For the preparation of the class tutors used the manual “Upbringing of the human-being and citizen” and catalogues of the exhibition prepared within the project “Holocaust and tolerance education in Ukraine” and video-fragments of Shoah survivor testimony. 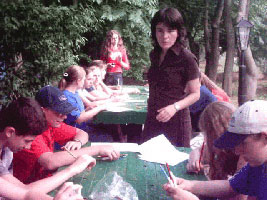 During the day 6 excursions on the Anne Frank exhibition (45 minutes each) were conducted for 120 participants of the camp. After excursion each teenager wrote either a letter to Anne Frank or a letter to the Righteous Gentile or his impressions on the exhibition or to draw a picture on this topic. All works were stocked together in a big roll and shown during the Ceremony of Remembrance and then placed in a classroom for all teenagers to read and to look at. These feedback letters and desire to receive and to read Anne Frank Diary could be considered as the main visible outcome of the understanding and acceptance of Anne Frank exhibition. 25 diaries, 5 catalogues of the Anne Frank exhibition and dozen catalogues “Jewish children of Ukraine”, 8 books “Sealed Car – stories about Holocaust” (in Russian) were presented for most attentive listeners and participants.
Informal intercultural contacts between Jewish teenagers and non-Jewish guides and researchers were very efficient for the understanding of the fact that anti-Semitism and Holocaust are not Jewish problems and not issues of main Jewish interest but human one. Teenagers realized the fact that only joint efforts can combat any form xenophobia and prejudice.
Administration of the camp would like to express its gratitude to the Anne Frank House for the visit of the exhibition to the camp.
Anna Lenchovska, psychologist and tutor of the camp “Shorashim”