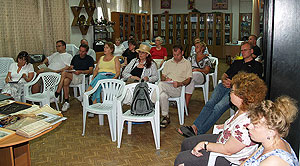 From June 11th until the 21st of June the Swedish Committee against Anti-Semitism in cooperation with the Ukrainian Centre for Holocaust Studies conducted an educational travel seminar on Jewish history and the holocaust in the Ukraine. The target audience were Swedish history teachers and people interested in the history of the Ukrainian Jewry. The seminar followed the route Kyiv – Poltava – Simferopol – Bakhchisarai – Sevastopol – Odessa.

In advance of the travel seminar in Ukraine a preliminary seminar took place in Stockholm on 11th -12th May, 2007. The participants-to-be had a chance to meet the associates of the Centre and to discuss the programme of the future visit. The associates of the Centre as well gave several lectures on history and culture of Ukrainian Jewry before the Holocaust and on the fate of Jews in Ukraine during the Holocaust. Along the idea of the organizers, such a preparatory seminar was fostering a better understanding of the issues to be raised on the seminar in Ukraine. The seminar took place in the office of the Swedish Committee against Anti-Semitism in Stockholm.

The travel seminar started at the 11th of June after the arrival and the welcome of our Swedish guests at Borispol airport with a presentation of the activities of the Ukrainian Centre for Holocaust Studies, a brief meeting with Anna Lenchovskaya, coordinator of the “Survivors of the Shoah Visual History Foundation” in Ukraine and a guided tour to Babiy Yar and Jewish places in Kiev.

The seminar continued in Poltava, with the main focus on the Holocaust and the teaching about that topic in Ukraine. The following lectures were held:

Theoretical and Methodological Approaches to the Holocaust in Ukraine
Training on the Resistance to Xenophobia and Propaganda in Ukrainian Secondary Schools. How is the Holocaust taught in Ukrainian Schools?
The Anti-Semitic Propaganda in Nazi-Sponsored Media in War-Time Ukraine
Comparative Research of the Holocaust and other Genocides: Holodomor of Ukrainian Peasantry, 1932-1933, Fate of Roma during the Nazi Rule
Furthermore the group visited the grave of Rabbi Shneur Zalman, the founder of ChaBaD denomination in Judaism in Hadyach and participated in a guided tour on the Swedish history of Poltava.

The next region to be visited during the seminar was the peninsula Crime. There the following lectures were given:

“Non-Ashkenazim Jewish Groups in the Crimea: Krimchaks, Karaites”
The Crimea: Fate of Jews During the Holocaust
“Soviet Policy and Jewish Agricultural Experiments in the Crimea in 1920-30th”
Muslim-Jewish Relations in Crimean History and during the Holocaust: Crimean Tatars, Jews, Karaites, Krimchaks
The lectures were supported by a big range of excursions and visits to museums in the region. The start was made with a tour to the Crimean Museum of Ethnography in Simferopol to underline the multicultural history of the peninsula. The life of the Jewish population of today was dealt with at the Jewish Welfare Centre “Khesed Shimon”. The group visited as well the place of mass extermination of the Jews and Krimchaks of Simferopol. The next station after Simferopol was Bachtschisarai, where the group visited the Khanate Palace and the Chufut-Kale Jewish-Karaite Cave-Town. During the stay in Sevastopol the main aim of the organisers was to give a precise overview about the history of the colonization in the Crime. Therefore the group visited the ancient Greek city Khersones where the ruins of ancient synagogue reminded of an important chapter of Jewish history in that region. Adjacent the participants visited the historical centre of Sevastopol city, the memorial to the Jews of Sevastopol murdered by the Nazis and the Old Jewish-Karaite cemetery.

The last spot of the seminar was Odessa. There the group participated in a guided tour through the city and its numerous Jewish places and visited the Museum of Literature. Odessa was one of the biggest and most active Jewish communities before the 2nd world war as it was demonstrated impressively during the visit to the Museum of the Odessa Jewish History and Culture. The end of this period of prosperity was posed by the visit to the places of Holocaust in Odessa.

The following lectures were held in Odessa:

History of Odessa Jewry
Round table on multicultural and Jewish history of Odessa
Holocaust of Odessa and Transnistria Jewry
Life of Jewish Odessa after the Holocaust
The seminar ended with a reflection of the participants and the organizers on the tour through the Ukraine. The Swedish participants, some of them were in Ukraine the first time, expressed an overwhelmingly positive reflection of the past ten days concerning the organisation, the gained knowledge about the Ukraine, its people, its Jewish life and the tragedies on its territories, which were rather unknown to them. They as well gave special thanks to the organizers. Most important to be mentioned were Anatoly Podolsky, the head of the Ukrainian Centre of Holocaust Studies, Nele Yushchenko, the accountant of the Centre, who did all the organisation, Vitalii Bobrov, who translated day and night without loosing his good mood and last but not least the lecturers and guides. As a conclusion the continuation of the cooperation between the SKMA and the UCHS and the plan for a third seminar in Ukraine can be seen.

In the morning of the 21st June the Swedish group departed from Odessa airport to Stockholm.